This past Sunday I competed in my first Triathlon of the season. I wanted to do a sprint just to nail some transition changes prior to Syracuse 70.3.

ATC Endurance puts on some pretty superb races and I was grateful to Bike Loft East to offer a entry for me.

The fifth annual Cooperstown Triathlon moved to a new venue at Glimmerglass State Park, just outside the village of Cooperstown.  The scenery of the park and the beautiful rolling landscape of the surrounding area did not disappoint!.
The race begins an 800yd swim in beautiful Otsego Lake. It is followed by an 18.8 mile bike ride through the rolling hills and beautiful countryside of the surrounding community. The race finishes with a 3.1 mi run pretty much within the park

I was nervous the days leading up to the race as I had a extreme asthma attack in the water 4 days prior that required Nebulizer treatments and a injection of Steroids into the tush. The water was cold and I couldn't get my breathing under control. As the days crept up, I kept messaging the race director for the water temp. I hope he wasn't too annoyed with me asking everyday!

I told my honey I would decide the day before the race if I was racing. Of course I had a meltdown the night before about my wetsuit, my asthma and everything in between.

The morning of was a little hairy. We drove the 1:40 to the venue and it seemed like the longest ride of my life. Through Rain, Fog, Almost running out of gas, Not being able to see, MapQuest directions being wrong, I was ready to throw in the towel.

We got there with moments to spare and of course there were little bumps with getting my packet and bike off the rack of the car.

I decided to get into transition, set up , get out and try to go for a warm up swim. Well, that really never happened because as soon as I put my face in the water they called us out of the warm up swim. I started to get really nervous, but I knew the water temp was in the 70's so it made me a little less crazy.

I did pre game with Sudafed and a puff on the ol' Proventil inhaler in hopes that things would settle down. 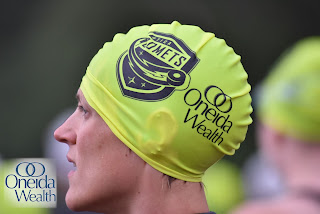 I decided to seed myself in the front and just see what I was able to do. A little caotic at the start of the swm, but I was able to find some decent swimming space and just take my time and sight as best I could. The water was semi choppy, not too bad.

I got out of the water in about 14 min, but on paper it was 15:43!! wth! I knew there was some fast swimmers in my group but I was just happy I didn't panic or drown in the water!

Transition- Quick in and out 57 sec

Bike- Now I love to bike!! This is my strongest leg and I was determined to make up some time on the bike. It was a sprint afterall and I could push hard. It needed to hurt! The bike had a few false flats followed by a fast back half x 2. I got a little over 19miles on my watch, but it was supposed to be 18.8 miles. 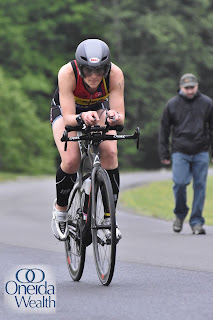 Transition 2- Lost my rack for a second but quickly found it. 56 seconds

Run- I went through transition and was told I was Second female by my honey and to keep my lead. I was gunning for the 1st person overall. The run was a 2 loop course with a little steep grinder thrown in there, but pretty much flat and fast. I saw the lead person at the first turn around. I thought I would catch her by the end but she was just too far for me to close the gap. I pushed hard and my lungs were screaming at me, but I knew the 3rd woman wasn't that far away from me.
I came in Happy to be 2nd Female Overall!!!! 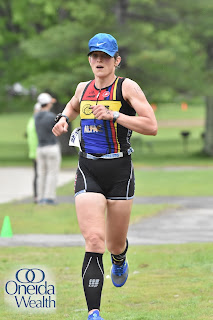 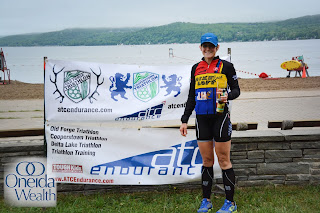 I have been working hard on my running and it is paying off! I am so happy with my performance. Now if I could just get faster at swimming!!

Posted by Unknown at 7:11 PM No comments: 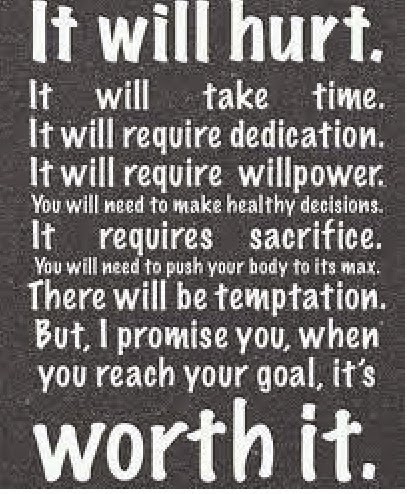